Thirty-six elementary Green Teams have already submitted Green Team award applications this year. Here are some examples of their projects. (Some were included in the February 2017 Class Act.)

Teacher Tiffany Comolli and the Go Green Club at Briarwood Elementary in Issaquah conducted four waste-free lunches this year, promoting them with videos, signs, and other announcements, including examples of how to pack a waste-free lunch. The team weighed the trash after each lunch and reported the results back to the school. The team also asked that the district not spray pesticides on their garden. They hope to make all the school grounds pesticide-free next year.

Shoreline teacher Patty Hansen and the Brookside Elementary Green Team improved the lunchtime recycling at program. Through more training, materials, and signage, the school has increased its recycling of milk cartons and other recyclables.

Monique Stuart-German and the Chestnut Hill Academy Green Team collaborated with a Green Team specialist to plan and carry out a color-coded Earth Week celebration. The week started with “blue day” to emphasize recycling and waste reduction and ended with “brown day” for gardening and habitat conservation. Each day the student body was encouraged to wear the color of the day and learn something new about resource conservation. The team made posters, delivered announcements, and hosted competitions throughout the week.

Carol Talmadge and Green Team students at Crestwood Elementary in Kent celebrated Earth Day by sharing their reports on the origins and meaning of Earth Day at each of three lunch periods. They focused on personal connections of Crestwood families. The also hosted a poster contest, which gave students a change to artistically show scenes of recycling, the environment, habitat, and landfills.

Northshore teacher Doug Poage and the sixth grade Green Team celebrated Earth Week by teaching East Ridge Elementary about a different conservation topic each day of the week. On Monday, students earned stickers if they recycled milk cartons. Trash-free Tuesday encouraged creating less waste and picking up litter at recess. Wednesday and Thursday focused on wasting less food and energy. On Friday, students wore earth colors and participated in art activities. Doug said, “It was a lot of work, but a huge success.” The event generated many positive comments from staff, students, and parents.

The Green Team at Echo Lake Elementary in Shoreline wanted to reduce waste and educate the students on which materials could be recycled or composted. With organizational help from para-educator Shannon McMaster, students volunteered every week on the project. The result was a huge decrease in the amount of material thrown in the garbage.

Mindy Mahoney and the Green Team at Endeavor Elementary in Issaquah wrote and delivered announcements, created posters, hosted sorting activities, and showed students in the lunch room where to put their newly acquired metal utensils after use. This team’s work ensured that Waste-free Wednesdays and the switch to durable utensils were successful.

Librarian Meg Handy and the students at Fall City Elementary decided to reduce plastic waste for Earth Day. Meg read One Plastic Bag to every class and led the students in trying their hand at making “plarn” (yarn made from plastic). Each student received a reusable bag. Casey Crook, Ava Wilhite, and Taryn Wilhite wrote a fun and inspirational story called “The Green Team” about a group of kids who convince Dr. Plastic to change his evil ways. 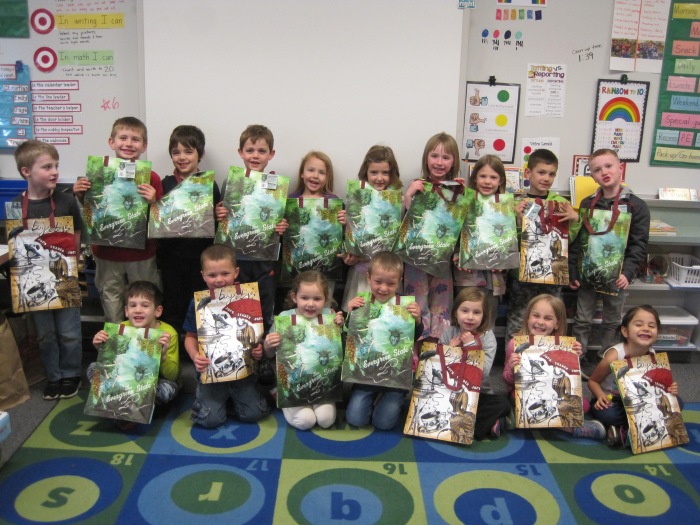 With help from leader Tami Koch, Green Team members at Fairwood Elementary in Kent organized into pairs to give weekly announcements about recycling and conservation. Team members also assisted custodians with recycling and learned which reminders students needed to properly sort recyclables.

The Grand Ridge Elementary Green Team and leader Renee DeTolla cut waste by over 70 percent in April through a multifaceted education campaign. The team made announcements to all 750 students, handed out flyers, and sent home information in the parent newsletter. In addition to sharing information about recycling, water usage, and reusable containers, the team helped the school transition from disposable utensils to metal ones.

Carol Scofield and sixteen Green Team members at Hazelwood Elementary in Auburn watched videos and read about ways to communicate to peers about recycling and reducing waste. The team talked to peers and created posters, which resulted in a dramatic increase in recycling and decrease in paper waste.

Parent volunteer Vinnette Lang and instructional specialist Shannon Hyde led another action-packed year of Green Team activities at Ilalko Elementary in Auburn. In addition to weekly recycling monitoring and Terracycle brigades, the team collected holiday lights for copper recycling and use in a community art project. They also participated in Auburn Clean Sweep, WE Day, and Jeans for Teens.

With leadership and support from family liaison Patty Samora and custodian Roman Chykalyuk, the Lake Grove Elementary Green Team designed and implemented a specialized lunch time recycling program. Students at each table sort their items into small tabletop bins that Green Team members collect and take to the recycling stations. Commitment to improvement, education, and fun has resulted in over 50 percent less garbage at lunch. 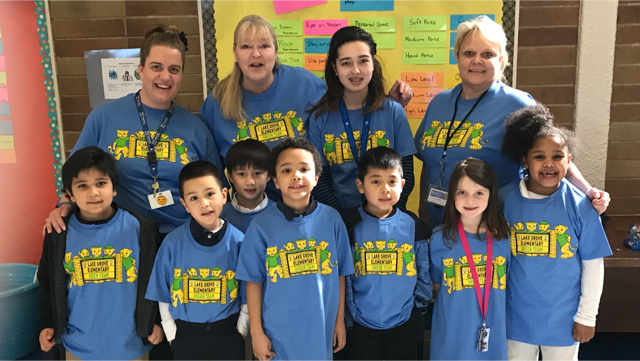 Tracy McGee and the Maple Hills Elementary Green Team improved recycling efforts and increased awareness of energy and water conservation this school year. Team members continued educating others on how to recycle properly in the classroom and lunch room, gave lunch time announcements, and added more recycling bins to areas that needed them. The team also gave teachers and staff tips on how to save energy during long weekends and breaks.

The Green Team at Moorlands Elementary, with guidance from teacher Linda McDonald, promoted reuse by participating in the Threads and Treads program. They collected gently used clothing to donate. 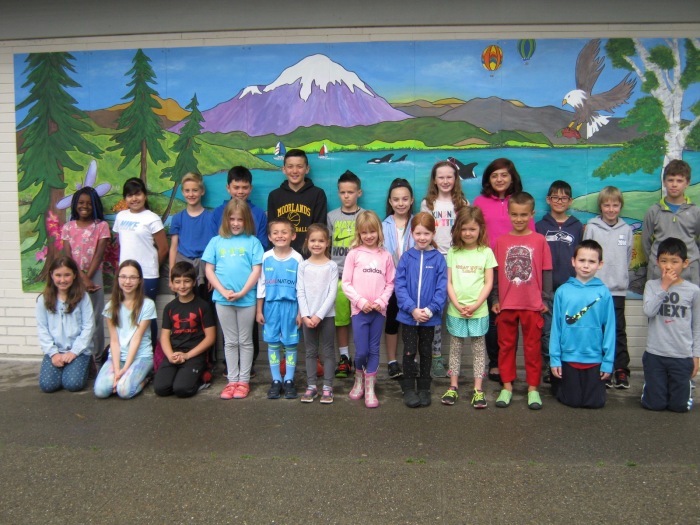 The North Bend Elementary Green Team regularly helped younger students properly sort waste and recyclables at lunch. With teacher Anne Melgaard, the team also selected three animals and created a bulletin board with information on them and their habitats as a reminder to take care of the earth. Students from all grades participated by signing their names under the animal they cared about the most. The team plans to end the year with Rainbow Day when each grade will be assigned a color and honor best practices for caring for and conserving the earth.

At Olympic View Elementary, teacher Pam Pierovich’s Green Team educates students to sort materials for recycling and composting at breakfast and lunch in the cafeteria, and also to conserve electricity and water.

The Talbot Hill Elementary Green Team collects and sorts materials accepted by Terracycle for reuse. With help from leader Jeanne Kalnick, they also set up a recycling and compost station, which they monitor every day at breakfast and lunch.

In addition to educating the student body on recycling, composting, and trash, the multi-grade Green Team at Tiffany Park Elementary, led by teacher John Paul, collected paper towels in classrooms for composting. The team also established a spirit week leading up to Earth Day, during which students and staff wore a different color each day to represent a particular resource and promote discussion about conservation. Students also created original artwork and poetry and other writing on the themes of reduce, reuse, and recycle.

Woodin Elementary Green Team members saw a steady reduction of recyclables being tossed in garbage bins after they hosted a Spring Waste Reduction Extravaganza. Green team members made a video to encourage reduction of food waste and increased recycling of other materials. With guidance from teacher Liz Kimbrough, they also created a pair of recycled trophies that are awarded to the classrooms that do the best job of sorting recyclables each week.